With the holidays upon us there are troves of books to curl up with by the fireplace. My paranormal romantic comedy goes great with mulled wine and cinnamon cookies. Part of Decadent Publishing’s 1Night Stand line, Frosty Relations features a young college graduate facing the complicated world of adulthood and confronting the frost mage she’s had a crush on for most of her life. Add some Christmas magic and Madame Eve’s renowned matchmaking service, and we’ve got the beginnings of an icy-hot love story.

In keeping with the holiday spirit, my publisher has discounted the book to $0.99 for a limited time on Amazon and ARe (the sale ends December 14, 1015). I’m also giving away a $10 gift card. To enter, leave a comment here and drop your details in the Rafflecopter widget either at the bottom of this post, or at this landing page on my website: http://www.taraquan.com/frostyrelations 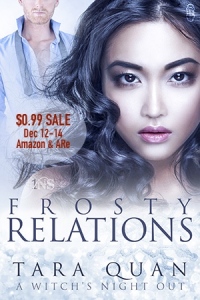 Attorney Jack Frost never understood why holidays did weird things to people. His secretary went on vacation, his best friend ditched their annual Aspen trip, and the law firm’s stubborn human resources assistant refuses his clerical support request. What’s a warlock to do on Christmas Eve but go on a 1-Night Stand? But when an oddly familiar empath shows up as his date, this ice mage has a hard time denying the magic of the winter solstice.

Faced with an anemic employment market and financial woes, college graduate and former witch Mina Mao lands an HR assistant job at Frost and Sons. Having spent her day saving Christmas from Frost Junior’s Grinch-like behavior, she accepts the gift of Madame Eve’s service and heads over to the Castillo Capital. When her date turns out to be her childhood crush and workplace nemesis, she braces herself for the sexiest icy ride of her life.

Limited Time Sale – Get it for $0.99 at Amazon or AllRomance

Globetrotter, lover of languages, and romance author, Tara Quan has an addiction for crafting tales with a pinch of spice and a smidgen of kink. Inspired by her travels, Tara enjoys tossing her kick-ass heroines and alpha males into exotic contemporary locales, paranormal worlds, and post-apocalyptic futures. Her characters, armed with magical powers or conventional weapons, are guaranteed a suspenseful and sensual ride, as well as their own happily ever after. Learn more at www.taraquan.com

Curious, she pulled up the accounting module and groaned when she read the current tally. “Please tell me mini-Frost already left.”

“No such luck.” Angela looked over her shoulder. “The invoices I turned in put Leo’s billings above his by a hair, so the Space Cadet is on a warpath. He’s marching down the hallway as we speak. By the way, what possessed you to let Beth take his overflow work this week?”

Angela rolled her eyes. “That girl spends half her day on the phone and makes careless mistakes. If she wasn’t tall, blonde, and busty, she’d never have gotten through probation. With the testosterone crowd, all she needs to do is bend at the waist and elbow-squeeze her boobs whenever she drops off a document.”

Sighing, Mina filed the information away and clung to a ray of hope. “Jack is young, male, and single. Maybe it’ll work on him, too?”

Angela snorted. “He grew up with us as babysitters, and we call him the Space Cadet for a reason. Do you know what that brat cares about more than womanizing?”

And Something a Little Hotter?

Yawning, he settled more comfortably into the seat and embraced the lulling haze. His mind wandered to the day Mina had showed up for an interview. In a departure from her current fashion slump, she’d worn a short skirt suit and glossy-black high-heeled pumps. On her way out, she’d swung by his office to drop off his major weakness—Shanghai White Rabbit Creamy Candy. He’d given her a high five and wished her luck.

That day, she’d stayed for no more than a few minutes and had left the door open. But in this foggy, slumbering vision somewhere between the dreams he could never recall and actual memory, he reached over her shoulder to shut it.

A mischievous grin on her face, she tilted her head back and met his gaze. “What do you want, Jack?”

He lifted his index finger and placed it over his lips. “Shh….”

Sashaying past him with feline grace, she shrugged off her jacket to reveal a crimson silk blouse. After draping the discarded garment over an office chair, she turned to face his desk. Placing her palms on the suddenly clutter-free glass, she threw him a sideways glance and motioned him over with her head.

The warmth of balmy fall allowed her to show off those smooth, toned legs. The tailored dark-green cotton hugged her ass’s subtle curve, the back slit giving him glimpses of her creamy thighs.

Coming up behind her, he closed one palm over her mouth. She remained still, her small body trembling as he nibbled her neck. He grazed his teeth over the slender slope, pausing to suck a bright-red hickey onto her snowy skin.

Hearing a muffled moan, he clamped his fingers tighter as he slid his other hand under her skirt. Finding damp heat, he yanked down her panties. The scarlet lace fell to circle her four-inch heels.

Biting her earlobe, he whispered, “Stay quiet, or everyone will know I’m fucking you.”

With one hand, he unbuckled his belt and freed his erection, his other arm still holding her in silent captivity. He kicked her legs apart and hiked up her skirt. Sliding his length between the creamy cheeks, he probed her wet opening with the tip of his cock.

A loud feline hiss jerked him out of the dream. Sharp claws dug into his thighs as the chair rolled back and hit the wall. The cat scampered off his lap. Rubbing his eyes, he tried to remember where he was. Once his mind regained focus, he glanced down at his crotch and noticed the very visible bulge. He could see why she’d reacted in a rather extreme fashion.

With a soft popping sound, the woman whose bare butt he’d envisioned appeared in front of him, her snowflake earrings swaying against the sides of her rosy face. At least she’d lost the Santa hat. “What the heck were you thinking about?”

The most honest answer would give her the wrong idea. After all, he wasn’t attracted to her. He’d happened to be envisioning office sex with someone who bore a remarkable resemblance to her, at the same time he got an erection, while she’d been on his lap—all unrelated events.